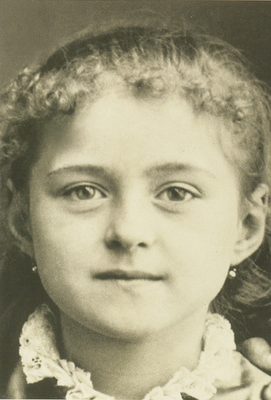 Today the Church celebrates the feast of St. Thérèse of Lisieux, also known as Theresa of the Child Jesus or The Little Flower of Jesus. She is, in my humble opinion, one of the most amazing saints in recent history.

By all appearances, her life was unremarkable. Born in Alençon in Normandy in 1873, she had a fairly normal if devout upbringing. Wishing to follow her older sister, Thérèse expressed a desire from a young age to enter the Carmelite monastery at Lisieux, which she finally was allowed to enter early when 15. As a nun, she lived a life of service and prayer with her fellow sisters. In her early twenties, Thérèse's health began to decline rapidly, and she died in 1897 at age 24.

Despite the humble details of her life, she was a spiritual giant. Upon the posthumous translation of her spiritual autobiography, Story of a Soul (written at the command of her superiors), Thérèse's passionate, quiet spirituality comes alive on the pages. Her story inspired many across Europe and she was canonized a saint a mere 28 years after her death. The town of Lisieux became the second most popular site of pilgrimage after Lourdes. In 1997, Pope John Paul II named her the 33rd Doctor of the Church (and only the third woman), recognizing the spiritual mastery of this "greatest saint of modern times," in the words of Pope Pius XII. 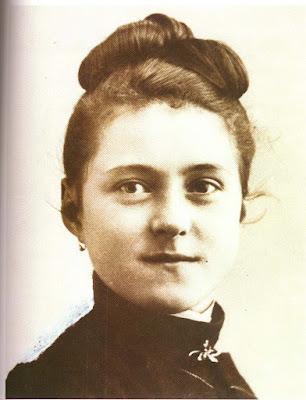 Thérèse, from a young age, had a deep and abiding love for God and wished to express this love by committing her life to his service. Realizing that she was unlikely to show her love by suffering martyrdom or accomplishing great feats, Thérèse decided that her sainthood would have to stem from transforming the mundane moments of the day into spiritual encounters with God. She writes:

Love proves itself by deeds, so how am I to show my love? Great deeds are forbidden me. The only way I can prove my love is by scattering flowers and these flowers are every little sacrifice, every glance and word, and the doing of the least actions for love.... Love appeared to me to be the hinge for my vocation. Indeed I knew that the Church had a body composed of various members, but in this body the necessary and more noble member was not lacking; I knew that the Church had a heart and that such a heart appeared to be aflame with love. I knew that one love drove the members of the Church to action, that if this love were extinguished, the apostles would have proclaimed the Gospel no longer, the martyrs would have shed their blood no more. I saw and realised that love sets off the bounds of all vocations, that love is everything, that this same love embraces every time and every place. In one word, that love is everlasting.

Thérèse's "Little Way" shows us that we need not flee to the desert or serve the poor on the street to achieve true holiness. Every action of every day can be consecrated to Christ. As Pope Benedict expressed earlier today:

Little Thérèse of Lisieux points out, as the answer to the great questions of life, the 'little way,' which looks instead to the essential of things. It is the humble way of love, capable of enveloping and of giving meaning and value to every human circumstance.... Dear friends, follow the example of this saint. The way followed by her is within everyone's reach because it is the way of total confidence in God, who is Love and who never abandons us.

I find it a profoundly hopeful thing to know and believe that human existence does have a purpose -- that our daily lives can be consecrated to that purpose -- that Love can be shown and honored in the circumstances of any life -- that, in short, holiness is possible for all of us, for any of us. Thérèse lived a simple life in rural France in the late 19th century but has had arguably more impact on the Church than any other saint of the last 200 years. She is a true model of sainthood -- daily sainthood -- that we can all follow. Let us all remember, "What matters in life is not great deeds but great love."

* * *
Thanks for your prayers while I was on retreat. It was a very restful and prayerful time for me -- a good charge-up to what I'm sure will be a tiring year. Things are getting pretty busy around here. We have diaconate ordination coming up a week from today, so guests and other VIP's will soon be arriving. The Fourth Year men are excited, I think, as are the rest of us. It's a good preview of what the future holds.
Posted by Fr. Andrew Hart at 3:22 PM

Yes, St. Therese is a very special saint. Enjoy your trip to France this weekend!
Be safe,
MOM

Fr. Andrew Hart
Arkansas, United States
I am a Catholic priest in Arkansas. This blog was originally begun while I lived and studied in Rome as a seminarian.