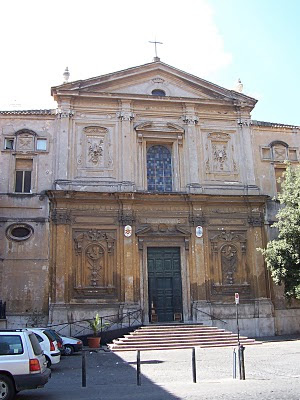 North and east of the Roman Forum and the Colosseum lies the Monti rione, or neighborhood, of Rome. One of the largest of the 12 sections of Rome, the "Mountains" neighborhood is named thus because it covers the Esquiline and Viminal Hills and part of the Quirinal Hill. In ancient times it was the most heavily populated area of the city and also one of the poorest. It's fitting then, perhaps, that this area of the city is the location of a church named after one of the greatest patrons of the poor, St. Martin of Tours. This church, the Basilica di San Martino ai Monti, is our station for today. 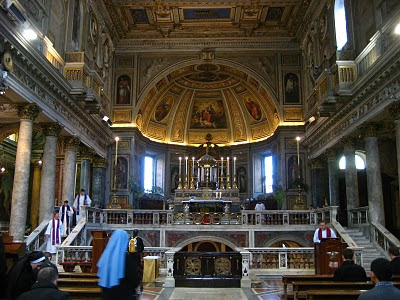 The church is alternately known as the Basilica of Sts. Martin and Sylvester, the latter being the pope-saint who founded it in the early 4th century. It originally was the dwelling place of the priest Equitius and the house church took its name from him for a time, the Titulus Equitii, dedicated to the martyrs of Rome. About the year 500, the complex was rebuilt and dedicated at that time to St. Martin and St. Sylvester. The current basilica dates from the mid-9th century, when the name St. Martin's on the Mount became the most common title for the basilica. The church has been served by the Carmelite Order since the 14th century, and the facade and much of the interior dates from the 16th century.

As I mentioned, it's fitting that a church located in one of ancient Rome's poorest areas should be named after St. Martin of Tours. Named after Mars, the Roman god of war, Martin was raised to be a great soldier like his father, who served as head of the Roman cavalry in early 4th-century Gaul. At the age of 10, and to the great displeasure of his family, Martin became entered into the catechumenate, the long process of study and piety that was the process one started upon in order to be baptized a Christian. Although Christianity had recently been legalized by the emperor Constantine, it was still a minority religion with a stigma of appealing mostly to the poor, uneducated, and marginalized social strata. Martin's choice of becoming Christian would also have bucked strongly against the Mithraic cult, which was the typical religion of the military elite. 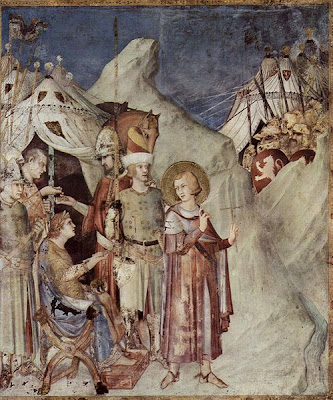 Martin gives up his career as a knight and soldier. A 13th-century fresco by Simone Martini, in the Chapel of St. Martin in the lower part of the Basilica of St. Francis in Assisi. 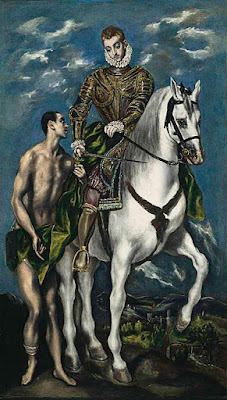 Saint Martin and the Beggar (c. 1599) by El Greco
At the age of 15, still unbaptized, Martin became a cavalry officer like his father and served in the area around Amiens. One winter day, coming upon the gates of Amiens with his soldiers, he met a scantily-clad beggar freezing in the harsh conditions. Martin quickly and impulsively sliced his own cloak in half and handed one piece to the poor man. That night, Martin dreamt he saw that half of his cloak again, now wrapped around the shoulders of Christ, who said to the angels, "The soldier Martin, still unbaptized, has clad me." Taking the vision as a sign of confirmation in his faith, Martin was baptized at the age of 18. He continued to serve in the cavalry until the age of 20, when on the eve of a great battle he determined, "I am a soldier for Christ. I cannot fight for man." He was imprisoned for disobedience and cowardice, but though he offered to step to the front of the ranks unarmed, the sides sued for peace and battle was averted. Martin was released and left for Tours, where he became a disciple of St. Hilary of Poitiers and an ardent proponent of orthodox Trinitarian theology in the fight against the heresy of Arianism. He founded monasteries across Italy and France, continuing to argue against Arianism and other heresies. In 371, he was named the bishop of Tours, where he was known as a loving and dedicated shepherd, especially concerned always for the poor. One of the most popular saints in Europe's history, he is venerated today as the patron saint of soldiers and the national patron of France. 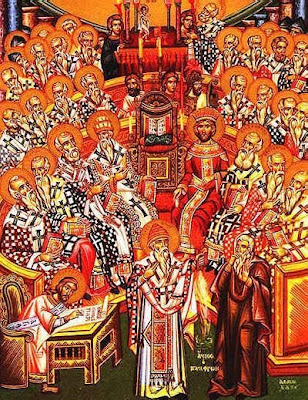 An icon of the First Council of Nicaea. There, the teachings of the priest Arius (in brown, foreground) are condemned.
The Basilica of Saint Martin has another interesting historical note, which also happens to relate to Arianism. The other saint for whom the church is dedicated, Pope St. Sylvester I, used the house church originally built on this site to prepare for the First Council of Nicaea. The council had been called to deal with the threat of Arianism, the heresy which denied the dogma of the Trinity by asserting that the Second Person of the Trinity (the Word, Jesus Christ) is not divine in the same way or to the same degree as the First Person, the Father. It is from this council that the Nicene Creed was written, which we still recite today in the liturgy. According to tradition, Pope St. Sylvester and his theological advisers gathered at the Titulus Equitii to examine the writings of the priest Arius and to prepare their arguments against him. After the council had ended, and Arius and others had been condemned, the Pope and his clergy gathered at the house once again to formally burn the heretical texts. The episode is remembered today as an important example of the duty of the pope and the bishops of the world to defend the Catholic faith from all moral and doctrinal error. 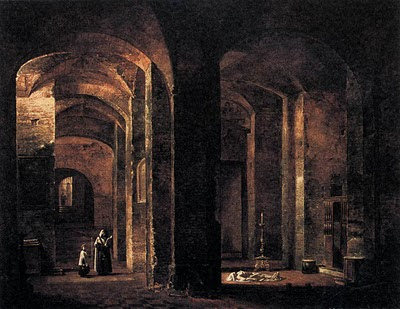 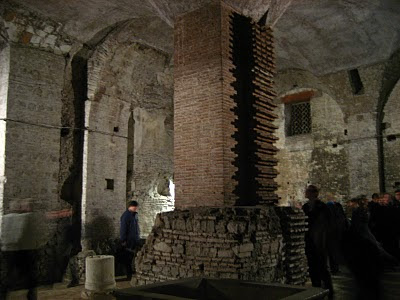 What the crypt looks like today.
In today's Gospel from St. John, Jesus rebukes the Jews for their lack of belief. Just as they failed to understand Moses, who -- like all the prophets -- foretold of Christ's coming, so too did they fail to see the Christ when at last he appeared. In our day, too, the temptation is ever present to abandon Christ, to see him merely as a wonder-worker who lived a holy life, or even as a prophet of social and moral virtue. Let us not confuse ourselves! "The works that the Father gave me to accomplish, these works that I perform testify on my behalf that the Father has sent me. Moreover, the Father who sent me has testified on my behalf." John testified that Jesus is the Christ; the works of Jesus testify that he is the Christ; and indeed, as he says, the Father himself, at the moment of Jesus' baptism, testified "This is my beloved Son, in whom I am well pleased" and again at his Transfiguration, "This is my beloved Son; listen to Him!"

My friends, let us be ever vigilant to guard ourselves from any influence or source that causes us to doubt this most fundamental of our beliefs, that Jesus is the Holy One of God, the Savior sent to redeem us. Like Pope Sylvester and the council fathers of Nicaea, we must remember that our faith has no other foundation, no other savior, no other hope than He to whom even the Father has testified. Indeed, imagine the Apostle St. John, long after witnessing the events of the Gospel above, writing again of the same truth, a truth he himself had understood from Jesus' words: "And we know that the Son of God has come and has given us understanding so that we may know him who is true; and we are in him who is true, in his Son Jesus Christ. He is the true God and eternal life" (1 Jn 5:20).
Posted by Fr. Andrew Hart at 9:00 AM

Fr. Andrew Hart
Stuttgart, Arkansas, United States
I am a Catholic priest, pastor, and canonist for the Diocese of Little Rock, Arkansas. This blog was originally begun while I lived and studied in Rome as a seminarian.